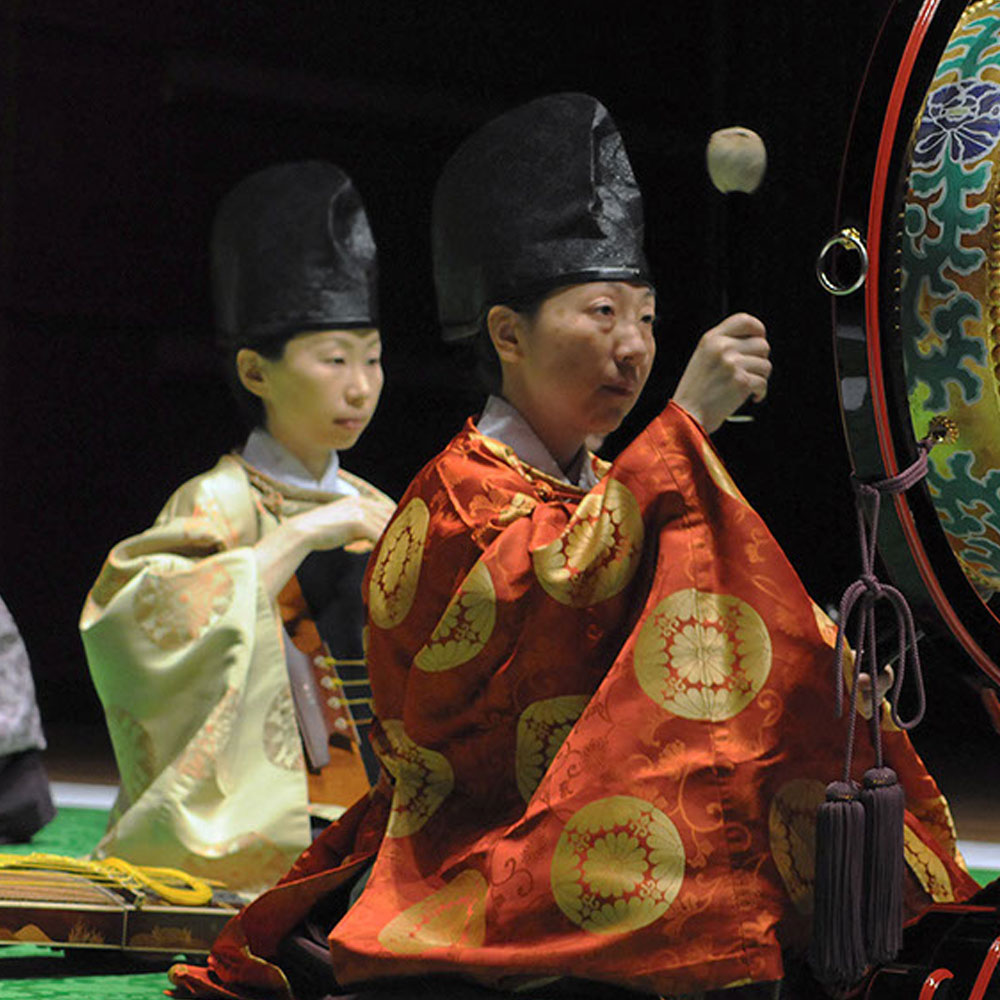 Reigakusha was established in 1985 as an ensemble of professional gagaku instrumentalists dedicated to the study and performance of the classical gagaku repertoire and the creation of new music for ancient instruments. Led by the distinguished musician and composer Sukeyasu Shiba–a specialist in music for the ryuteki flute and biwa, and a former member of the Music Department of the Imperial Household Agency–Reigakusha has around thirty members. Since its formation, Reigakusha has acquired a fine reputation for its performances of the traditional gagaku repertoire; its revival of classical works that had disappeared from the repertoire over the past hundred years; its reproduction of facsimile instruments based on ancient Chinese and Japanese gagaku instruments preserved in the Shoso-in (the 8th-century Imperial storehouse in Nara); and its commissioning of new works for traditional instruments by leading Japanese composers. At present Reigakusha’s repertoire consists of more than 60 ancient gagaku works, 30 new works in the classical tradition, 20 revived works (based on scholarly research into music that had long disappeared from the traditional repertoire), and many major new works by contemporary composers such as Toru Takemitsu, Toshi Ichiyanagi, Maki Ishii, and Toshiro Saruya.

In the past decade, Reigakusha has received invitations from major concert halls such as the National Theatre of Japan and Suntory Hall in Tokyo, Izumi Hall in Osaka, and Kitara Hall in Sapporo. The ensemble has also appeared at leading music festivals such as the Kita-Kyushu International Music Festival, the Tsuyama International Music Festival, and the Yatsugatake Music Festival. In October 1995, Reigakusha presented a special outdoor performance of Takemitsu’s In an Autumn Garden at Meiji Shrine in Tokyo.

In July 1996, Reigakusha was invited to Seattle, Tanglewood, and the first Lincoln Center Festival in New York to perform Toru Takemitsu’s In an Autumn Garden. In October 1998, the ensemble also gave the UK premiere of In an Autumn Garden in Glasgow, Birmingham, and Cambridge, as well as at Queen Elizabeth Hall in London as part of the Takemitsu Festival, “Spirit Garden,” artistically directed by Oliver Knussen. To date, Reigakusha has given concerts of traditional and contemporary pieces in Brussels, Cologne, Berlin, Oslo, Innsbruck, Amsterdam, Morocco, and Volos, to name just a few. Reigakusha has been invited to the opening series of the Walt Disney Concert Hall in Los Angeles (2004), the special “Best of Boulez” concert to mark Pierre Boulez’s 80th birthday presented by the Chicago Symphony Orchestra (2005), the Salle Pleyel in Paris, the MITO Festival in Italy (2009), the Music From Japan Festival in the USA (2010), the National Gugak Centre in Seoul and Busan (2015), the Frankfurt Lab with Ensemble Modern (2015), and the British Museum (2018). 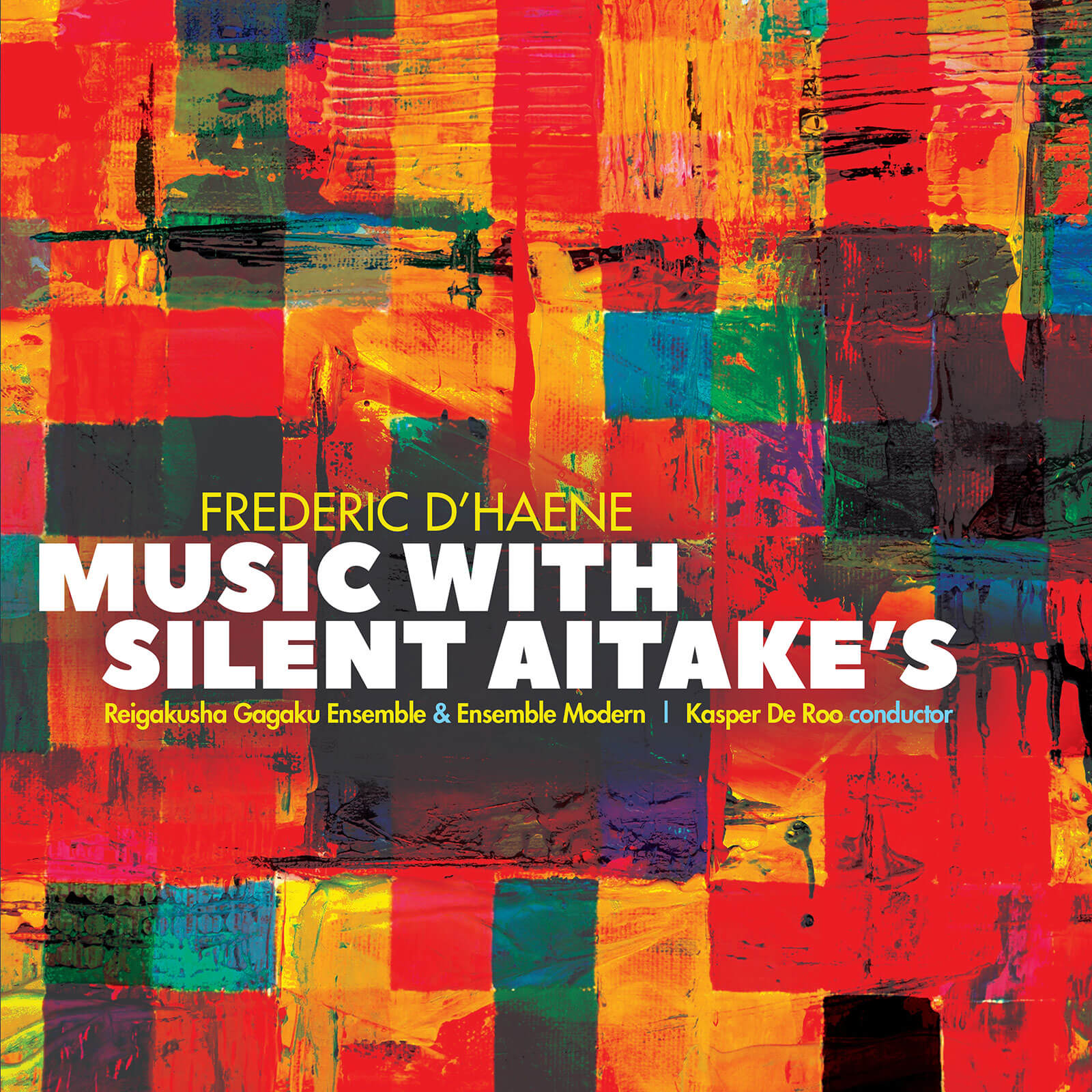 Release Date: March 8, 2019
Catalog Number: RR8008
21st Century
Chamber
East Asian
Large Ensemble
Percussion
Composer Frederic D’Haene creates a remarkable musical world in MUSIC WITH SILENT AITAKE’S. When he was 25 years old, D’Haene began his life-long fascination with gagaku music, or traditional Japanese court music, that has informed his compositional style throughout his career. This study of a musical style different from that of his own culture resulted in what the composer calls “paradoxophony” or “paradoxical coexistence.”
Discover