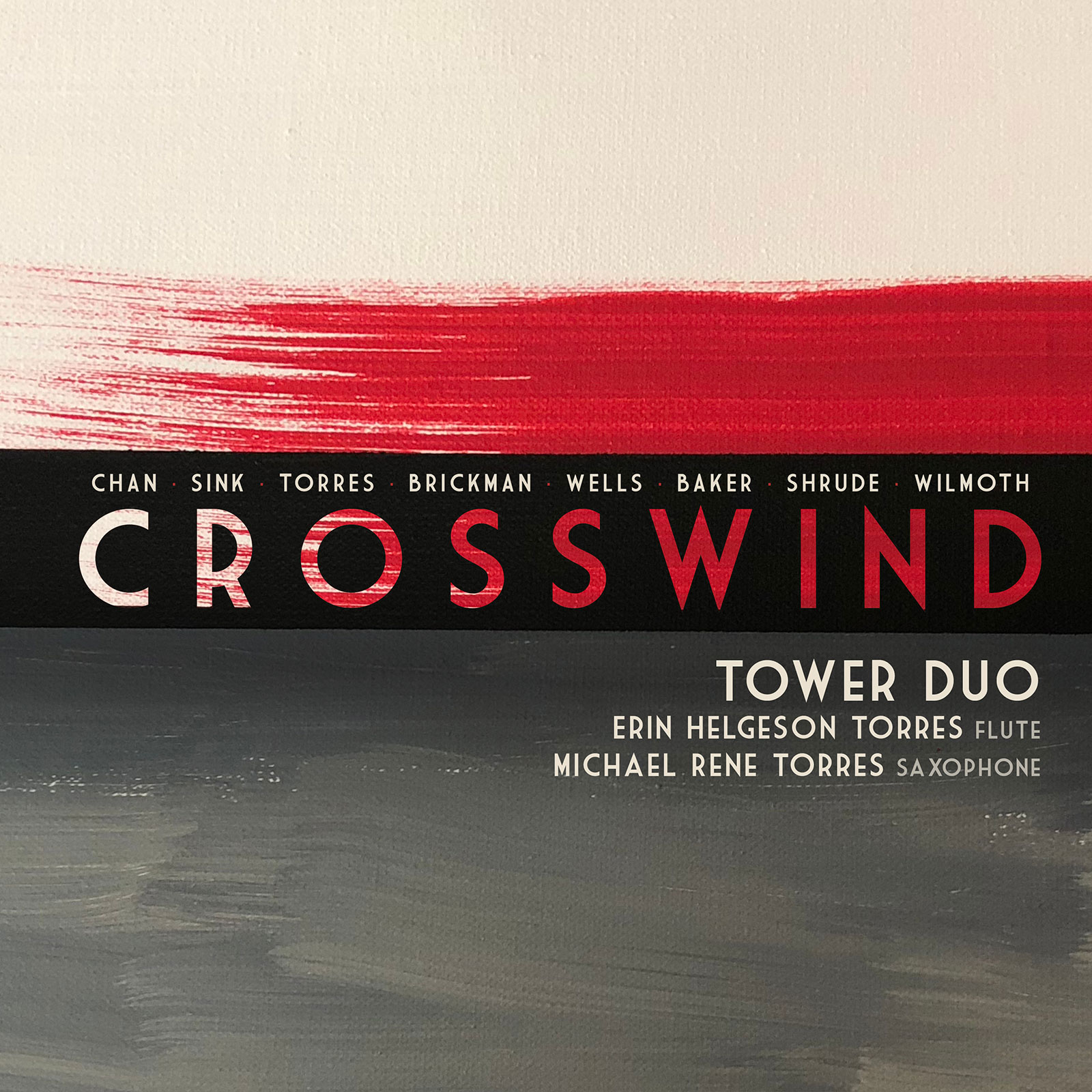 On CROSSWIND, flutist Erin Helgeson Torres and saxophonist Michael Rene Torres, who have performed as Tower Duo since 2007, deliver a stunning set of performances which utilize flute and saxophone. Each performance evokes a sensory or psychological experience as wide-ranging as the various sensations encountered in a wet, humid environment, or the juxtaposition of consonance and dissonance. The album accentuates the duo’s emphasis on performing and premiering contemporary works by emerging composers, such as PARMA label-mates Chin Ting Chan and Scott Brickman, as well as one of Torres’ own compositions, the complex and introspective Four Short Episodes.

CROSSWIND’s title track was composed by Chin Ting Chan specifically for Tower Duo; Tower Music, written for the duo by Thomas Wells, perfectly highlights their virtuosity. Also written for Tower Duo is Charlie Wilmoth’s Three Pieces, on which the performers play in rhythmic unison at one moment before disrupting or distracting one another in the next. The piece was composed to reflect the hyper-focused way that the two think and move on stage.

Composer Philip Sink’s work is inspired by social awareness, the human experience, science, and art. The subtle interplay between flute and saxophone on places never painted, which is complimented on the album by his poem of the same name, evokes the quiet beauty of the natural world.

CROSSWIND presents the dynamism between performers in the context of the duo. Tower Duo packs a powerful sound that leaves listeners leaning in for more.

Recorded May 28-30, 2018 in Weigel Hall Auditorium at The Ohio State University School of Music in Columbus OH 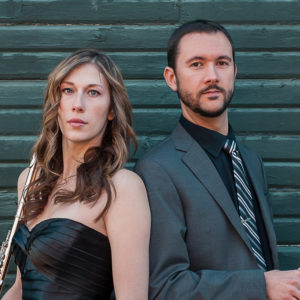 Tower Duo is a flute and saxophone ensemble based in Columbus, Ohio that specializes in creating engaging musical experiences with a particular interest in performing and premiering contemporary works by living composers. Tower Duo, whose members are flutist, Erin Helgeson Torres and saxophonist, Michael Rene Torres, has been performing together since 2007 and gave its inaugural recital at the Brevard Music Center Festival and Institute in North Carolina. The duo has since performed all across the United States at universities, conferences, and festivals. Highlights include the Omaha Chamber Music Society’s Eko Nova series, the Cleveland Uncommon Sound Project’s Re:Sound New Music Festival, and multiple North American Saxophone Alliance Biennial conferences. Tower Duo recently recorded their debut album, Crosswind, which features the duo’s favorite collaborations with composers from the first decade of their artistic work. Crosswind was released under the PARMA Recordings label in January of 2019.

Maria Staeblein joined the Ohio State University School of Music in 2009 as a faculty member in collaborative piano. An active chamber musician and soloist, she has played numerous performances throughout Europe, the United States, and Canada, and has made recordings for Vienna Modern Masters and Albany Records. She won first prize at the International Competition of the 33rd European Music Festival and has received prizes and awards at national and international competitions including the International Piano Competition Città di Senigallia Italy. Her teachers include Erich Appel, Arie Vardi, György Sebök, Leon Fleisher, Lev Naumov, and Hans Leygraf.

Commissioned and premiered by Tower Duo in 2013, CROSSWIND by Chin Ting Chan is full of interactivity and energy. It features intricate gestures that not only stimulate conversations, but also create a complex overall texture. The two instruments are often meant to be heard as a single entity. Chin Ting’s music stems from an interest in representing his impressions of the visual world with sonic images. It is often inspired by patterns and shapes he discovers in daily objects, as well as imaginary landscapes he sometimes encounters. He is Assistant Professor of Music Composition at Ball State University.

Places never painted by Phillip Sink was written for Bill and Lauren Funke and premiered at the 2012 World Saxophone Congress in St. Andrews Scotland. The piece explores the idea that many wild and beautiful places on earth will never be reimagined by the human hand. Sink’s music is inspired by social awareness, the human experience, science, and art. In addition to traditional composition for voice and acoustic instruments, he composes audiovisual works that combine video with electronics. He is currently Assistant Professor of Music Theory and Composition at Northern Illinois University.

there are places never drawn
by small hands,
expert hands,
nor feeble hands
that tremble under the weight of
a dull, short pencil

-never cut up/split up
into small fragments,
thinly smeared with viscous glue
and smoothed out
on a pale, stoic wall

-these wild places-
some exist before an eager lens,
only to be captured
and streamed into
infinite zeros and ones

FOUR SHORT EPISODES by Michael Rene Torres was premiered by Tower Duo at the Brevard Music Center in 2011. The work explores the timbral possibilities of the flute and saxophone combination and depicts four different stages of a dramatic, intricate, and sometimes explosive dialogue between two characters. Torres’ music tends to explore the juxtaposition of consonance and dissonance and is often inspired by psychology. He describes his music as dramatic and theatrical with complex, intricate moments, and calm, introspective moments.

EPIC SUITE by Scott Brickman is in five movements. Three faster-paced movements frame two slower ones. The title “Epic” doesn’t refer to the scope of the piece, but of it being a duo with two heroes. Like most of Brickman’s music, this work is a 12-tone piece based on the octatonic scale. Brickman is Professor of Music and Education at the University of Maine at Fort Kent. He is passionate about athletics and his Baltic and Slavic ancestry and culture. His orchestral music has been performed by orchestras in Kiev and L’viv Ukraine.

TOWER MUSIC by Thomas Wells was written for Tower Duo and premiered by them in November 2017. Wells’ goal was to write a piece that highlights the virtuosity of the duo and exhibits a strong and clear narrative. The first movement is the most complex of the three in terms of development, transformation of material, contrasts of mood, and length. The second movement is a lament, occasionally interrupted by animated figures suggestive of Movement One. The perpetuum mobile third movement dissolves into a static concluding section that recalls the mood of the lamentazione. Wells is Professor of Music Composition at The Ohio State University School of Music.

PRECIPITAL PAIRING by Dylan Arthur Baker was premiered by Tower Duo at the Brevard Music Center in 2014. The two movements explore different kinds of sensations encountered in a wet, humid, environment (inspired by the weather in Brevard NC). “Dew” explores the feeling of walking on wet grass, barefoot, in the morning. “Mist” explores the experience of looking at mountains in the distance as mist comes and goes, making everything come into and out of focus. Baker is a freelance composer living in the Great Pacific Northwest. Much of his music is inspired by the natural world.

NOTTURNO: IN MEMORIAM TORU TAKEMITSU by Marilyn Shrude was written in memory of Toru Takemitsu, whose music has always been a great source of inspiration to Shrude. The original version for violin, alto saxophone, and piano was premiered on June 10, 1996 at The New York Public Library for the Performing Arts at Lincoln Center by Maria Sampen, violin; John Sampen, alto saxophone; and Marilyn Shrude, piano. A version for flute, alto saxophone, and piano followed in 2007. Shrude is a Distinguished Artist Professor of Music (Composition) at Bowling Green State University.

Charlie Wilmoth’s THREE PIECES is repetitive, but it never sits still. The performers are constantly on high alert, playing in rhythmic unison at one moment before interrupting or distracting one another the next. These pieces were written for Tower Duo, and have much to do with the hyper-focused way Michael and Erin think and move in performance. Wilmoth taught composition and theory at Otterbein University in Ohio for seven years before a recent move to Los Angeles. His most recent project is PopGrammar.com, an online music theory course for pop songwriters.