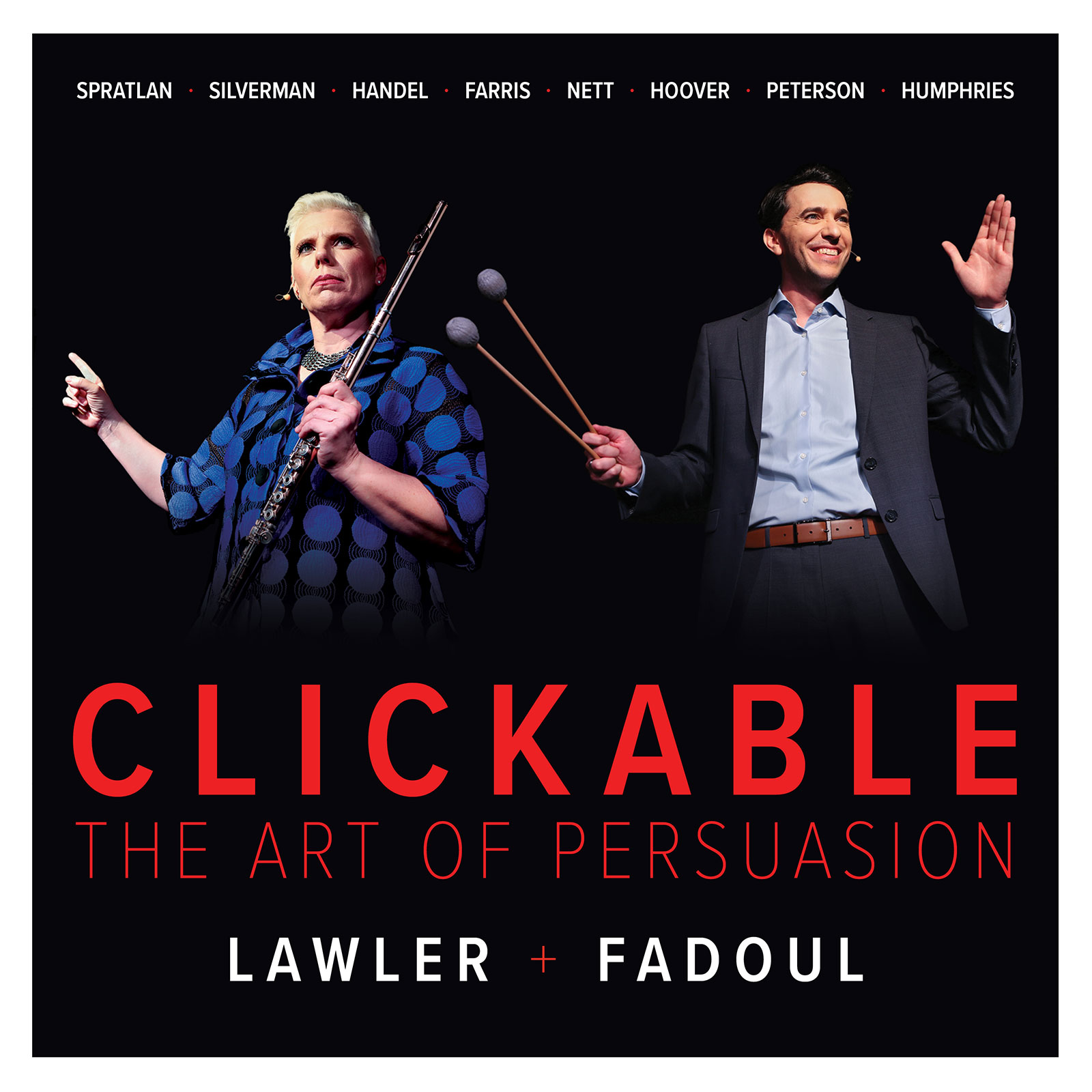 THE ART OF PERSUASION

CLICKABLE: THE ART OF PERSUASION, from the celebrated duo of flutist Zara Lawler and marimbist Paul J. Fadoul, is a concept album, an audio version of a live show that uses theatrical performance and audience participation to convey the many facets of persuasion – from powerful storytelling to coercion, pressure, and manipulation. The album includes commercial jingles, a lullaby, dust jacket texts set to music, a protest song, a serenade, and a spoken-word commentary on social media.

Nowhere is persuasion more ubiquitous than in advertising. The lively tempo of Jingle Without Words nonverbally conveys that our drive towards innovation is also a relentless need for more. It is followed by the first of four Hedonistic Treadmill vignettes, told as a series of commercial breaks. Those pieces, interspersed throughout the album, together exhibit the fleeting happiness that results from chasing bright and shiny new products. The power of persuasion is also captured by the frantic pace of Want It. Need It. Have It, as Lawler’s flute seems to be in pursuit of Fadoul’s marimba, a chase that is musically indicative of our consumer-centric society.

The album also features three dust jacket pieces that touch on the darker sides of persuasion. The bucolic music that accompanies the copy from the dust jacket of Jane Austen’s Sense & Sensibility belies the presentation of the book’s tale of secrets, greed, and a dark undercurrent of societal pressures. The slightly ominous tone of the music that accompanies both Liars and Power Money Fame Sex typifies the baser sides of human nature.

The spoken word piece Click. Tweet. Like. Repost. is a rendition of a poem by Liza Jessie Peterson, which addresses the paradoxical aspects of social media. Unaccompanied by any instrumentation, the percussive cadence of the poet’s words makes a powerful impact. Common Thread, which closes the album, was recorded live. A singalong with the audience, the track is a perfect example of a means of positive persuasion.

LIARS
Text from dust jacket of We Were Liars by E. Lockhart with additional dialog by Ralph Farris1

All photos by Julie Lemberger

1The Text of LIARS & Sweet Shop provided by How Far Publishing (ASCAP). Used with permission. 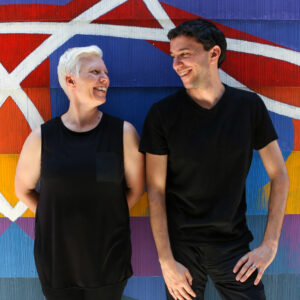 The Canadian-American duo of flutist Zara Lawler and marimbist Paul J. Fadoul, hailed as “a great treat” (Classical WETA, Washington DC), offers audiences an unexpected mélange of classical virtuosity, lively commentary, theatrical flair, and a dose of indie rock sensibility. The duo’s repertoire ranges from delightful arrangements of classics to newly written pieces for their unusual instrumentation. Their debut album, Prelude Cocktail, was called “collaborative artistry at its finest” by I Care If You Listen. Recent highlights include a residency in Western Massachusetts as part of Chamber Music America’s Residency Partnership Program, tours of West Virginia, Michigan, and Ohio, and a New York appearance at Mannes School of Music’s Glassbox Performance Space. In 2016, Lawler + Fadoul incubated and premiered their theatrical concert, Clickable: The Art of Persuasion, at the cell theatre in New York City. Clickable has been performed across the United States. 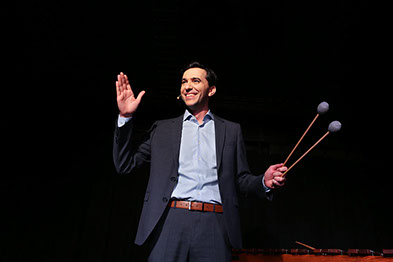 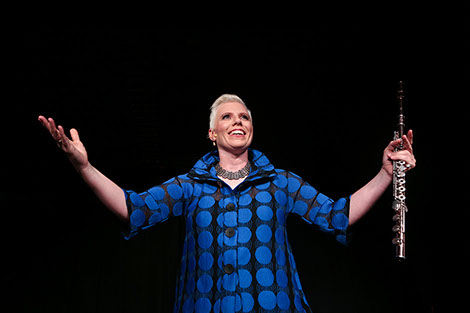 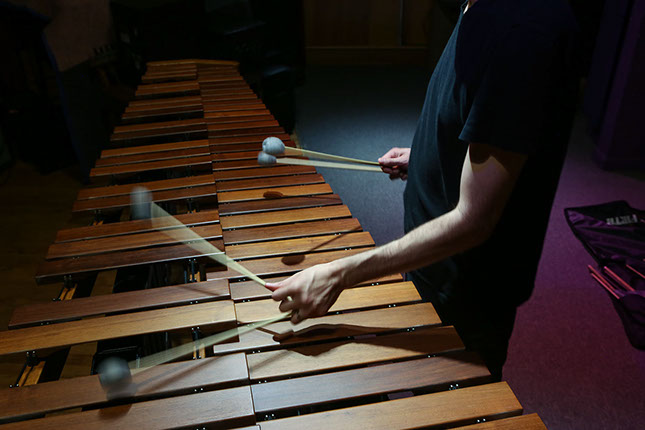 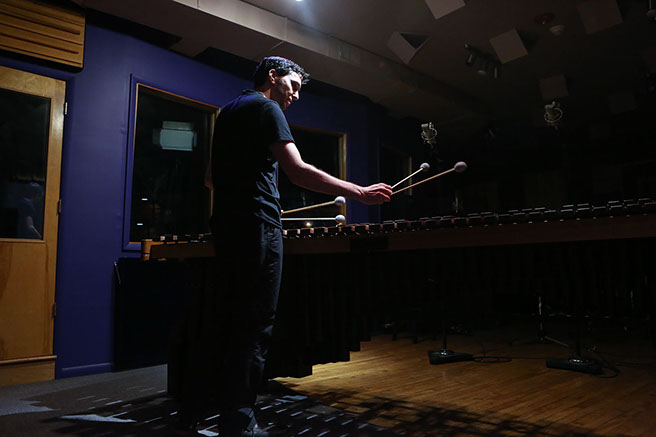 This album is dedicated to the memory of Katherine Hoover and Bill Spence. Both were instrumental in the creation of Clickable; Katherine as a composer and early viewer of the show, and Bill as a guest performer on our final track. We are sorry they are not here to enjoy the final product, but are so grateful for their contributions.

Clickable: The Art of Persuasion is a concept album, an audio version of a live show that, in addition to the music, uses theatrical performance and audience participation to tell the story of persuasion. Creating a concert, and now an album, this way opened us up to musical sources that are rarely performed in a chamber music setting. The album includes commercial jingles, a lullaby, dust jacket texts set to music, a protest song, a serenade and a spoken-word commentary on social media.

Persuasion is a double-edged sword. At its best, it can take the form of powerful storytelling, an appeal to a person’s emotions or to their sense of justice. At its worst, it is coercion, pressure, manipulation. Our dust jackets touch on the darker sides of persuasion. Jane Austen’s Sense & Sensibility hints at secrets, greed and a dark undercurrent of societal pressures, and LIARS and Power Money Fame Sex both explore the baser sides of human nature.

The Hedonic Treadmill is told as a series of commercial breaks. Once one market need is met, another must immediately take its place, and the happiness each brings us is fleeting. Lewis Spratlan’s tune conveys that drive toward innovation, but also our relentless need for more.

No treatment of music and words of persuasion would be complete without addressing the paradoxical aspects of social media, the way it sells itself as a place of community and an arena for discussion, but leaves us instead feeling “isolated and silenced,” as Liza Jessie Peterson reminds us in her poem Click. Tweet. Like. Repost.

But Common Thread is the response to this, a step into the light. It is music that leaves us feeling joyful and full, rather than empty and alone. What could possibly be more powerful and more persuasive than a singalong, in real time, and “in real person” to quote Peterson again? We have moved beyond self-interested persuasion and offer instead an invitation based on trust. We’ve found that our audiences have leapt at the chance to sing with us, and it feels healing. We aren’t just creating music together, we are creating a community.

Please read on for details about each piece, and how we made a theatrical and interactive show into an album:

A sly, contemporary American wink and nod to the European tradition of “songs without words.” Originally written for chamber orchestra, our version for two people involves virtuosic multi-tasking, with both of us playing several percussion instruments at the same time (and in Zara’s case, that’s while playing flute or piccolo!). In addition, the audience whistles bird calls with us on cue. In this studio version, the whistles and bird calls were performed by our producer and sound engineer, and all the percussion was played by Paul and layered in on multiple tracks.

This set of commercial breaks refers to the advertiser’s idea that once one commercial need is filled, another arises to take its place. Tracing the development of laundry from washboards to hand-cranks to electric washing machines to smartphone apps, it uses the theme from Jingle Without Words to create a unifying thread for the whole show/album. In live performance, a series of props are used to trace the progression of laundry technology…on the album, sound effects recorded in the field play that role. Zara recorded herself banging clothes against a rock, and our producer Jeanne Velonis recorded her own washing machine.

Adam, a friend of Paul’s from college, mentioned this piece to us while we were in the development process for Clickable, and the title was so perfect, we pretty much agreed to include it in the project without even hearing it! Its relentless energy conjures up the exuberance of the marketplace and the capitalist drive for more. Originally written for alto saxophone and marimba, Adam himself made the arrangement for flute.

On tour many years ago, Zara was washing her clothes in a hotel laundry room, idly scanning the dust jackets of books left in the “take one/leave one” pile. It suddenly struck her that dust jackets could be the basis of a cool show: they are specific enough to suggest a story, but open-ended enough to be explored creatively. Since the job of a dust jacket is to persuade you to buy a book, we thought they fit perfectly with the theme of our album. Together with our stage director and composer collaborators, we chose the following three dust jackets to turn into music:

Jane Austen’s classic tells the tale of two sisters enmeshed in “a world where status and money govern the rules of love.” In the live show, we perform this while dancing an English Country Dance, the style of dance Jane Austen often describes in her novels. For the album, we added a sound backdrop of twittering birds and a babbling brook to capture that feeling of the English countryside, and to hint at the undercurrent of societal pressures felt by the two heroines. The field recordings were made by Zara and our producer Jeanne Velonis.

Composer Ralph Farris adapted the dust jacket of E. Lockart’s mysterious young adult novel about a political dynasty. In the live show, the audience sings in four-part harmony, creating a soundscape that is not possible with just two performers. On the album, we created the multiple layers of sound in the studio with guest backup singer (and Zara’s wife!) Aine Zimmerman.

This book by Gretchen Rubin is part self-help, part social commentary, and is surprisingly timely for our current political and social climate of self-promotion and propaganda. Jason Nett’s score uses loop pedal to create a feeling of the self-reinforcing nature of power, money, fame and sex.

Composer Katherine Hoover was inspired by an Apache folk tale in which a young man calls a young woman to love by playing the flute. In the live performance, this piece is performed with choreography by Barbie Diewald. For the album, it was recorded in a beautifully resonant space reminiscent of the depth of the canyon.

Blow the Moon Out

One night, while singing her daughter to sleep, Zara realized that lullabies certainly must be considered music of persuasion. This traditional lullaby is the one that she sang in her household for the first three years of her daughter’s life. Lawler + Fadoul arranged it for voice, alto flute, vibraphone and cajón. Often in a live evening performance, the timing of this number coincides with Zara’s daughter’s bed time, and she enjoys thinking about her sleeping at home while we are on stage.

In addition to the Hedonic Treadmills included on the album, live performances of Clickable include commercial breaks in which we perform custom jingles written for sponsors of the show. Some are individual donors, and others are small businesses. Most of the jingles were written by us, with the exception of The Sweet Shop, written by Ralph Farris who also composed LIARS. The percussion you hear is, in fact, Paul shaking boxes of candy!

We asked spoken-word artist Liza Jessie Peterson to create a work for us, inspired by Gil Scott Heron’s The Revolution Will Not Be Televised. That early hip-hop masterpiece uses commercial slogans of the time to contrast with the need for real-world action in the face of injustice. Liza’s update uses the lingo of social media to comment on the similar contrast between IRL connection and virtual persuasion.

Another great form of music of persuasion is the protest song. Audiences love to sing along with this stirring melody, and its message of unity in diversity makes a powerful ending to the show. For the album, we recorded it live in upstate New York…with an enthusiastic audience and guest folk musicians Bill Spence (hammered dulcimer), George Wilson (bass) and Howard Jack (guitar).

CLICKABLE: The Art of Persuasion [Promo]