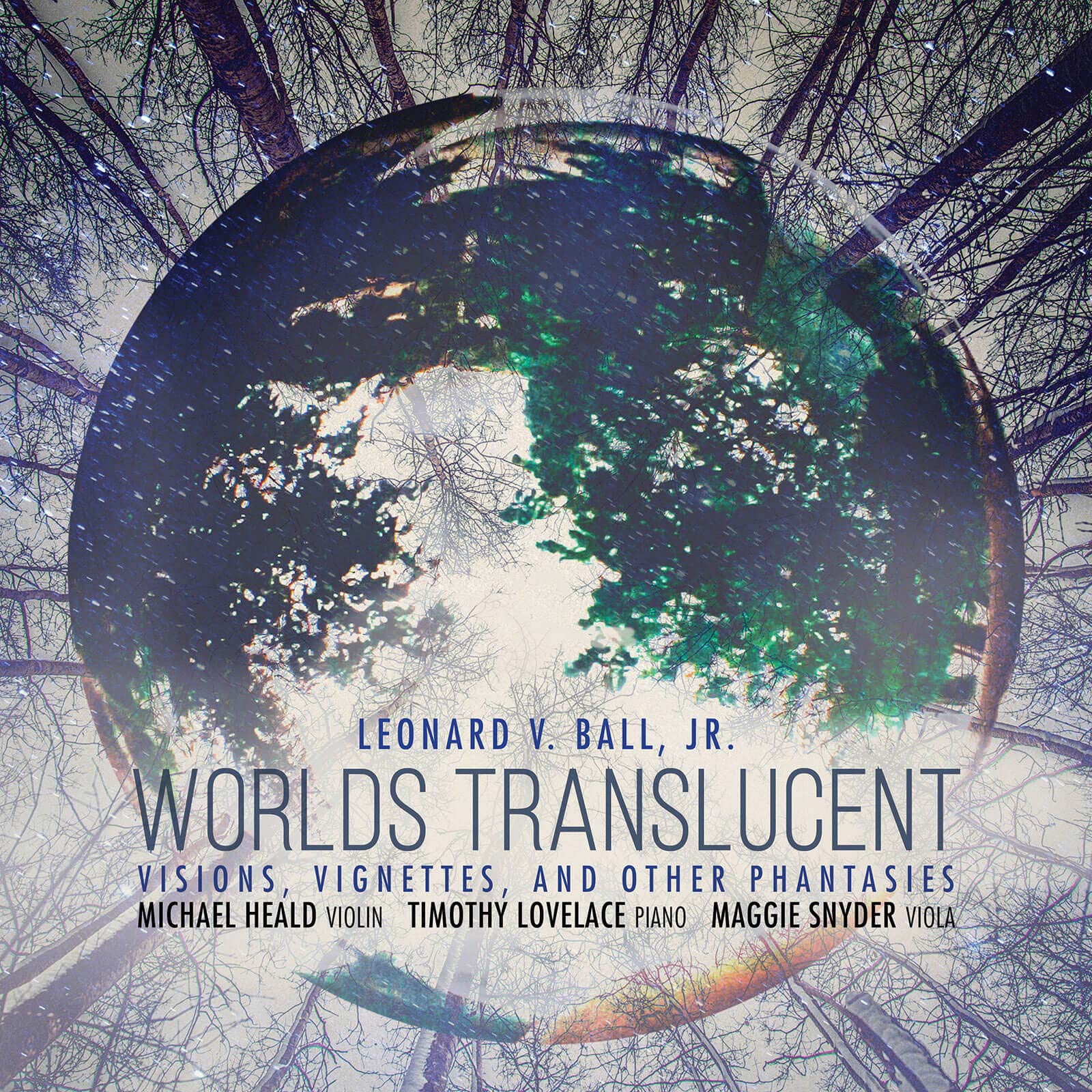 VISIONS, VIGNETTES, AND OTHER PHANTASIES

In his first album with Ravello Records, composer Leonard V. Ball, Jr. presents WORLDS TRANSLUCENT, a collection of works completed across the span of nearly a decade that capture the joys, fears, and fascinations of everyday life. The album, which features music for violin, viola, and piano, deals with the gravity of human mortality alongside the simple amusements of domestic life that counterbalance it.

WORLDS TRANSLUCENT begins with Night Visions, a series of three movements – Ball prefers to call them “visions.” The first movement sets the pace for the album with an explosion of frantic 16th notes on the violin, joined by the interjection of the piano. The second “vision” stands in contrast to the first; its deep silences and long string lines seem to drip into the expanse of time. The next movement regains its ecstatic energy, with violin and piano responding to one another. The Forest (f)or the Trees is a series of musical memorials to Ball’s loved ones. The second movement, “Requiem I (for cw),” expresses bittersweet beauty through dissonant violin strains. In this work’s two “dance” movements, individual characters from Ball’s own life are personified. Vignettes du Jour breaks the tension with a degree of levity inspired by the scurry of backyard critters and the adventures of a wily housecat. The string lines often erupt into pursuit of one another, clambering up scales only to fall back down. Lastly, within ~ without is an exploration of life’s duality, pairing sparse silences with strident viola strains and concluding with a rousing and definitive finale.

WORLDS TRANSLUCENT is all at once an eloquent consideration of existential fears as well as a salubrious jaunt infused with palpable joie de vivre. Ball’s compositions, in all their cerebral gravitas and levity, make an excellent musical companion through the hills and valleys of life. 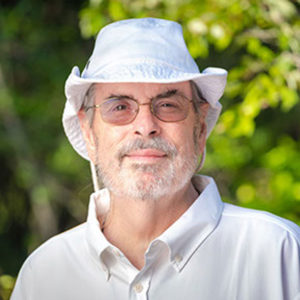 Violist Maggie Snyder has performed solo recitals, chamber music, concertos, and as an orchestral musician throughout the United States and abroad. She has performed at the Kennedy Center, Carnegie Hall, and the Seoul Arts Center, and in Mexico, Greece, Korea, and Russia. She has performed under the batons of James Levine, Yuri Temirkanov, David Zinman, Robert Spano, Leonard Slatkin, James DePreist, Julius Rudel, James Conlon, and Michael Tilson Thomas, and at such festivals as the Brevard Music Festival, the Sewanee Summer Music Festival, and the Aspen Music Festival, where she was a Time Warner Fellow. In May 2009, she made her recital debut in Weill Recital Hall at Carnegie Hall with her sister duo, Allemagnetti. The recital featured three world premiere works written for the ensemble by Thomas Pasatieri, Kamran Ince, and Garrett Byrnes, and the duo was hailed as a “winning pair,” with a “highly promising debut,” by The New York Concert Review.

Ms. Snyder is also principal viola of the Chamber Orchestra of New York, which recently recorded for Naxos, and is on the artist-faculty of the Brevard Music Festival. She has played chamber music with members of the Tokyo and Cleveland Quartets, and is the violist of the Franklin Quartet at the University of Georgia. Ms. Snyder is an Arabesque Records recording artist with three CDs issued to date: Allemagnetti: Music for Viola and Harpsichord, featuring the works by Pasatieri, Ince, and Byrnes; Modern American Viola Music; and Viola Alone: Old, New, and Borrowed, featuring Stunned for solo viola by Libby Larson, commissioned and premiered by Ms. Snyder. Ms. Snyder has given masterclasses, clinics, and performances at universities and music schools throughout the country, including Interlochen Arts Academy, Eastman, Hartt, and The Universities of Rochester, Tennessee, Kentucky, and South Carolina. She earned the Masters and Graduate Performance Diploma from the Peabody Conservatory of Music, serving as the teaching assistant for Victoria Chiang. Her Bachelor’s degree is from the University of Memphis, where she was a Pressar Scholar. Her principal teachers have been Victoria Chiang, Heidi Castleman, and Lenny Schranze. She has served on the faculties of West Virginia University, Ohio University, and the University of Alabama, where she was Head of Strings. Ms. Snyder is currently on the faculty of the Hugh Hodgson School of Music at the University of Georgia, where she was the 2018 recipient of the Creative Research Medal.

Michael Heald, currently Associate Professor of Violin at the Hugh Hodgson School of Music, University of Georgia, studied violin in London with Emanuel Hurwitz, then at the Royal Northern College of Music with Richard Deakin. He received his masters and doctorate in violin performance at Michigan State University, studying with Walter Verdehr. He began his performing career in England, where he was a member of the English String Orchestra for three years, recording with Nimbus, and played regularly with the City of Birmingham Symphony Orchestra under Sir Simon Rattle, recording major repertoire for EMI. Other musical experiences included playing with the BBC Philharmonic Orchestra, the Royal Liverpool Philharmonic Orchestra, and the Philharmonia Orchestra. In Michigan, he was concertmaster of both the Greater Lansing Symphony Orchestra and the Jackson Symphony Orchestra, and principal second violin of the Michigan Chamber Orchestra. As a member of the American Sinfonietta for five years, Michael performed close to one hundred concerts across Europe, appearing as assistant concertmaster on one of the tours. The orchestra was also in residence each summer at the Bellingham Music Festival in Washington. He has also been a guest concertmaster for the Shreveport Symphony Orchestra.

Michael has performed solo and chamber concerts to critical acclaim across the United States and Europe, collaborating with such artists as Ralph Votapek, Arvids Klisens, and Ian Fountain. He was a member of the Arlington String Quartet and the Beaumont Piano Trio, and, as a member of Quadrivium, was in residence at the Virginia Museum of Fine Arts for a season of innovative concerts connected to the various exhibitions. Michael had the honor of performing The Lark Ascending to Her Majesty Queen Elizabeth II on one of her official visits to Hereford, England. He has appeared on BBC Radio and on various public radio stations in the USA. His concerto performances include those by Bach, Bruch, Vivaldi, Mendelssohn, Tchaikovsky, Wieniawski, Elgar, Beethoven’s Triple Concerto, Schnittke’s Concerto Grosso No. 3, and Brahms’ Double Concerto. He has been on the faculty of the Montecito Music Festival in California and the Wintergreen Festival in Virginia. In 2010 he was awarded a significant grant from the National Endowment of the Arts to present a chamber music festival of American music at the University of Georgia. He is also an Arabesque Records recording artist, releasing Elgar and Beethoven: Sonatas for Piano and Violin, in 2014.

Pianist Timothy Lovelace heads the Collaborative Piano program at the University of Minnesota and is an active recitalist, having been featured at Rio de Janeiro’s Sala Cecilia Meireles, Carnegie’s Weill Recital Hall, Washington’s Kennedy Center, New York’s Merkin Concert Hall, Chicago’s Dame Myra Hess Memorial Concerts, and on chamber music series sponsored by the symphony orchestras of Chicago, Cincinnati, Detroit, Minnesota and the Saint Paul Chamber Orchestra. As a soloist, he has performed with the Minnesota Orchestra conducted by Osmo Vänskä. The roster of internationally-known artists with whom Lovelace has appeared includes Miriam Fried, Nobuko Imai, Robert Mann, Charles Neidich, Paquito D’Rivera, and Dawn Upshaw. For thirteen years, he was a staff pianist at the Ravinia Festival’s Steans Institute, where he played in the classes of Barbara Bonney, Christoph Eschenbach, Thomas Hampson, Christa Ludwig, and Yo-Yo Ma, among others. A proponent of new music, Lovelace has performed the works of many living composers, and he has presented premieres of works by John Harbison, Osvaldo Golijov, and Libby Larsen. He has recorded for the Albany, Arabesque, Blue Griffin, Boston Records, MSR, and Naxos labels. His principal teachers were Harold Evans, Gilbert Kalish, Donna Loewy, and Frank Weinstock.

Tim Redpath, founder of Horizon Music Production and a highly respected clarinetist and saxophonist, has been at the forefront of contemporary chamber music for almost thirty years. He has performed and collaborated with some of the most exciting and eclectic musicians around. These include Apollo Saxophone Quartet, Trifarious Ensemble, London Saxophonic (touring and recording extensively with Michael Nyman and Moondog (Louis Hardin)), Moondog Big Band, Andy Scott’s Sax Assault & Bob Mintzer, Barbara Thompson, Joanna Macgregor, Django Bates, and Iain Ballamy. He has broadcast extensively on BBC television, BBC Radio 2, 3 & 4, Classic FM and has featured on over twenty CD albums. He has been guest principal clarinet and saxophonist with many of the UK’s leading orchestras including Opera North, BBC Philharmonic, Hallé, BBC Scottish, RTE, and Philharmonia. As founder member and soprano saxophonist with the highly acclaimed Apollo Saxophone Quartet for 23 years (1985 – 2008), Tim has amassed a large collection of awards including winner of the Tokyo International Chamber Music Competition (plus the Lufthansa Outstanding Performance Award), Countess of Munster Trust, Royal Overseas League, and the Tunnell Trust. In his role at Horizon Music Production, he has produced and engineered albums for leading labels including Sony BMG, Naxos, Sanctuary Classics, Black Box, Signum, and Classic FM.

From the London Mozart Players to Don Weller, throughout her extensive performing career Rachel Calaminus has demonstrated her ability to perform in all music genres. In great demand as both violin and viola player, she leads a busy performing schedule and works with many of the UK’s leading orchestras and ensembles including the Royal Philharmonic Orchestra and Royal Ballet Sinfonia. She has been featured on countless recordings spanning the whole musical spectrum including classical, jazz, world, and popular music. Rachel is a founder member of the Trifarious Ensemble

Written for Michael Heald, Maggie Snyder, the late Liana Embovica, and Timothy Lovelace, the works in this collection were completed over an eight-year period. Contemporary events, human relationships, long-held fears, and everyday life-experiences fueled the creative process, as did the dedication, enthusiasm, talent, and musicianship that the above performers brought to every rehearsal and performance. No words can adequately express my gratitude.

Night Visions, written for Michael and Liana, was finished in 2008. At the time, I was actively engaged in transferring older works from handwritten to digital notation and had just finished editing Images from a Forgotten Past, a 1985 three-movement work for clarinet and piano. I thought it would be interesting to model a new piece after that piece. Night Visions, the resulting work, has, therefore, a deceptively ethereal second movement surrounded by two more energetic, perhaps even aggressive, “visions.” The listener is free to determine just what these visions might reflect.

The Forest (f)or the Trees

The Forest (f)or the Trees (2016) is a set of five movements for solo violin, each based on my memories of family members who have passed on. In some cases, the music reflects feelings still fresh from news of an untimely, unexpected death, or the expected loss of an immediate family member or members (Movements I, II and IV pertain). The Dance movements (III and V), represent the character and personality of specific loved ones, from my perspective, inspiring the humorous or dynamic nature associated with the respective movements.

Vignettes du Jour (2013) developed from an interest in musically relating events that were taking place on a daily basis in our backyard. Ashley, our cat, loved to stalk various unsuspecting targets; squirrels ran up and down sturdy tree trunks and raced through fragile upper branches; blue jays constantly called to one another; and squabbles were initiated and resolved from early morning to late at night. In essence, the work is a song cycle about everyday life, without words.

within ~ without, written for Maggie and Timothy, was finished in 2015. The work explores the duality so prevalent in every part of life, and how these opposing forces interact to contribute to our overall essence of being. Illusion versus reality, lies versus truth, inner calm versus outward intensity, outward calm versus inner turmoil, joy versus despair, and other unstated pairings, are all part of the “phantasies” that make us who we are and help us exist in our world.