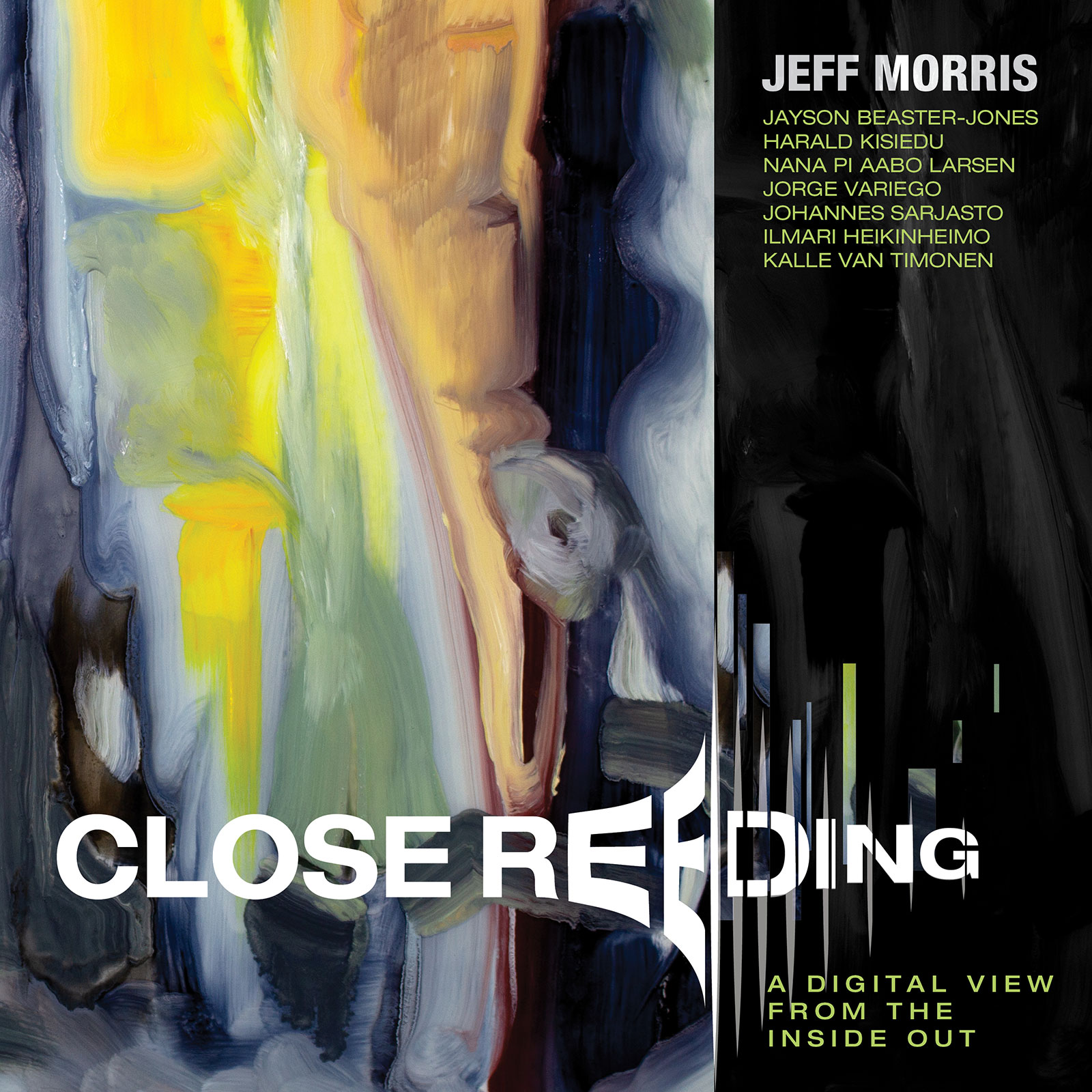 A DIGITAL VIEW FROM THE INSIDE OUT

Jeff Morris presents his fourth Ravello Records release, this one focusing on woodwinds and employing his characteristic live sampling and electronics. CLOSE REEDING is the latest since HEARING VOICES, an album which set its sights on the most fundamentally-human musical instrument: the human voice. Now, Morris turns his attention to woodwind instruments, which he terms the “next most human” family of instruments. By way of digital manipulation and live improvisation, Morris gives this thesis a convincing exposition.

One might think of the “humanness” of a saxophone as being diametrically opposed to the cold, binary logic of a computer. As Morris sees it, the electronic interface that Morris controls is extremely sensitive to the input it receives, outlining its operator’s humanity in a sort of digital “counter-relief.” CLOSE REEDING is an unchoreographed dance between Morris and the instrumentalist. Pulsating with the thrill of live performance, the musicians react to each other, and somehow, the machine seems to add its own artistic choices to the composition as well.

While most of the tracks feature a single woodwind instrumentalist going head to head with Morris, What’s in a Whisper, a 4-movement piece, includes not only an alto saxophone but also a drum set and synthesizers. By isolating split-second musical moments, Morris draws out each instrument’s range of timbral complexity with microscopic clarity—giving serious credence to the title CLOSE REEDING.

Electronic music lovers set a high bar when it comes to pushing the creative envelope. Morris rises to the challenge in CLOSE REEDING, delivering a program that is at once cutting edge and elementally human. With the help of a cadre of gifted musicians from around the world, Morris’s latest installment will leave audiences anxiously anticipating what’s next. 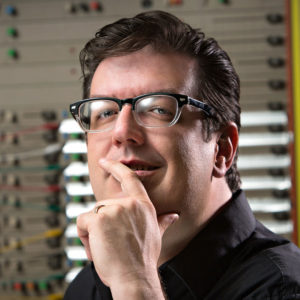 Jeff Morris creates musical experiences that engage audiences’ minds with their surroundings. His performances, installations, lectures, and writings appear in international venues known for cutting-edge arts and asking deep questions in the arts. He has won awards for making art emerge from unusual situations: music tailored to architecture and cityscapes, performance art for the radio, and serious concert music for toy piano, robot, Sudoku puzzles, and paranormal electronic voice phenomena.

Jayson Beaster-Jones teaches in the Global Arts Studies Program at the University of California, Merced. As an ethnomusicologist whose work focuses on the music industry of India, his books examine music retail stores as sites of cultural production in contemporary India and explore the history of Bollywood film songs and their musical and social meanings.

Harald Kisiedu is a saxophonist and improviser who studied with Ornette Coleman and Oliver Lake. He has performed with Branford Marsalis, George Lewis, Henry Grimes, and Hannibal Lokumbe and made recordings with the improvisational band Burnt Sugar the Arkestra Chamber. A music historian, he teaches jazz history and jazz studies at the University of Applied Sciences Osnabrück, Germany and has written on Peter Brötzmann, Ernst-Ludwig Petrowsky, and Muhal Richard Abrams. His latest book is European Echoes: Jazz Experimentalism in Germany, 1950–1975.

Nana Pi Aabo Larsen has taught at the Jazz Line at the Music Conservatory in Malmö, Sweden and The Creative School in Fredericia, Denmark. She uses her Extemporize music sign language in her teaching and as conductor of the Extemporize Orchestra. She has hosted Friday JAM—a ruthless jam every Friday at Tøjhuset in Fredericia, as well as leading and composing for the Danish-Swedish quintet Nezelhorns and the trio Nanchen 3.14, and performing with Jesper Zeuthen’s Big Claus, Akira Sakata, Olaf Rupp, and Steve Heather.

Argentine clarinetist and composer Jorge Variego teaches at the University of Tennessee, Knoxville. He has created and performed many works for clarinet and electronics in international music festivals including MATA, EMS, Sonoimágenes, Holland Festival, Festival de Jazz de Vigo, Via Stellae, the International Computer Music Conference, and Big Ears and can be heard on many albums. The National University of Quilmes, Argentina, published his book on algorithmic composition as part of a collection on Art and Sciences.

Saxophonist and composer Johannes Sarjasto is a rising star in the Finnish jazz scene. His style is uncompromising and he always seeks new creative directions. He is active in many groups ranging from hip hop to jazz and improvised music. Besides leading his own quartet, Sarjasto plays solo concerts, and he has performed with Soul Valpio Band, STRIP, Uinuva, and Alhos.

Drummer and composer Ilmari Heikinheimo has worked with many major artists in his home country of Finland. Combining polyrhythmic and rubato phrasing in his explosively dynamic and sensitive style, Heikinheimo brings melodic dimensions to his drumming, as well as a keen sense of tonal color. He joined the new version of Vesala’s Sound Fury reformed in 2010, and he plays in a trio with guitarist Raoul Björkeheim and bassist Ville Rauhala, the Pohjan Pojat quartet, and an experimental chamber music trio “Kadotettujen Paratiisi” (“Paradise of the Doomed”), which performs improvisational compositions by Ville Vokkolainen.

Kalle Van Timonen, part of the No License/No Science collective driving furiously into the freedom offered by improvisation, has held open/broken sound clubs throughout Scandinavia. He also builds his own instruments to discover the borders between image, light, and sound. His projects include trio Oberon/Makemake, Lee-Enfield in East-Asia, and DJ’ing as Exotropical Ataraxia.

My last album focused on the most natural and human instrument: voice. You might think brass instruments are the next most human, since sound originates in players’ own lips vibrating. Woodwind instruments like saxophones seem farther removed since it’s a reed that vibrates instead. I’m not sure how to explain it, but having played both myself, I know reed instruments can transmit more human expression than brass, perhaps because reed players get a more intimate and complex grip upon their instrument as the reed sits inside the mouth. Although more equipment lies between the performer and listener, the human imagination can still be heard through a complex and intimate interface.

The same can be true with computer music. It isn’t always the case—simply clicking a button can’t carry much nuance—but more varied, sensitive, and even error-prone controls can let humanness shine through. I’ve been “playing computer” since the beginning of this century, mostly using a technique called live sampling. My software can make no sound of its own. Instead, it captures the sound of an instrumentalist improvising with me, and I transform it into something new. This way, listeners witness the original sound being created, then notice how it loses its “aura”—its specialness—when it comes back as a mere copy. They then witness the sampled sounds gaining their own aura as they change into something new and influence the ongoing improvisation, all live in the moment. Sampling and playback pushed to extremes introduce their own artifacts that didn’t come from the sampled instrument but become part of my musical voice in performance.

Each performer on this album explores their instrument’s potential in their own way as my live sampling instruments create a moving sonic “hall of mirrors” for them to navigate. In Slurp, we crawl inside Nana Pi’s saxophone to explore the instrument’s sound even though she never really plays a “note.” Even though he’s in the largest and loudest ensemble on the album in What’s in a Whisper, Johannes also sticks to the quietest, subtlest sounds of his instrument. Since I couldn’t record each instrument close and isolated there, my samples carry the patina of the ambient acoustics and noise from the amps, highlighting these ephemeral aspects by making them part of the music.

In a world of copy-and-paste, autocorrect, emoji, and videoconferencing, I build intimate and nuanced interfaces that invite the audience to discover where the fingerprints of expressive human creativity can still be found. The human element can also be betrayed by giving up some control over the machines. In Close Reeding and Voclarise, some of my sampling instruments have minds of their own. They recall and recombine past material into motives that seem new, even though they can’t be. Their changing unpredictably keeps me on my toes as I jump to respond to them musically. This is most extreme in Baby’s On Fire, which involves no sampling. Instead, I perform with Baby, a 1980s-vintage mixing console (complete with fake wood grain and padded rail), with no input except its own output. This feedback loop turns every fader, filter, and pot into something unpredictable, keeping me in a constant state of experimentation, discovery, and adaptation. I found myself adopting techniques from other instruments like the banjo, mandolin, cello, and pedal steel guitar to work out how best to map my body and ideas onto its controls.

Because we’ve each entered this crucible of improvisation with technology, in this music, we hear something more than any or all of us could have conceived, as it was borne from each unique musical situation. To close this portrait of human creativity from the perspective of the technology that captures it, the final track reprises the album through the perceptions, recollections, and interconnections made by an artificial neural network.

And to bring our reflections back to the realm of human perception, the cover art comes from visual artist April Zanne Johnson, who created it from her perceptual responses to the album. (aprilzannejohnson.com)

Thanks to Kevin Patton for obtaining and reconditioning Baby, as well as the University of Tennessee, Aristotle University Thessaloniki, and the Texas A&M University President’s Excellence Fund, Honors Program, Academy for Visual and Performing Arts, College of Liberal Arts, and Department of Performance Studies for making this work possible.

Harald Kisiedu (alto sax) improvising with Jeff Morris (Texas A&M University) playing Baby, the 1980s vintage mixer turned into a feedback instrument. No external effects were used except for a volume pedal and a tiny bit of reverb on the final mix.