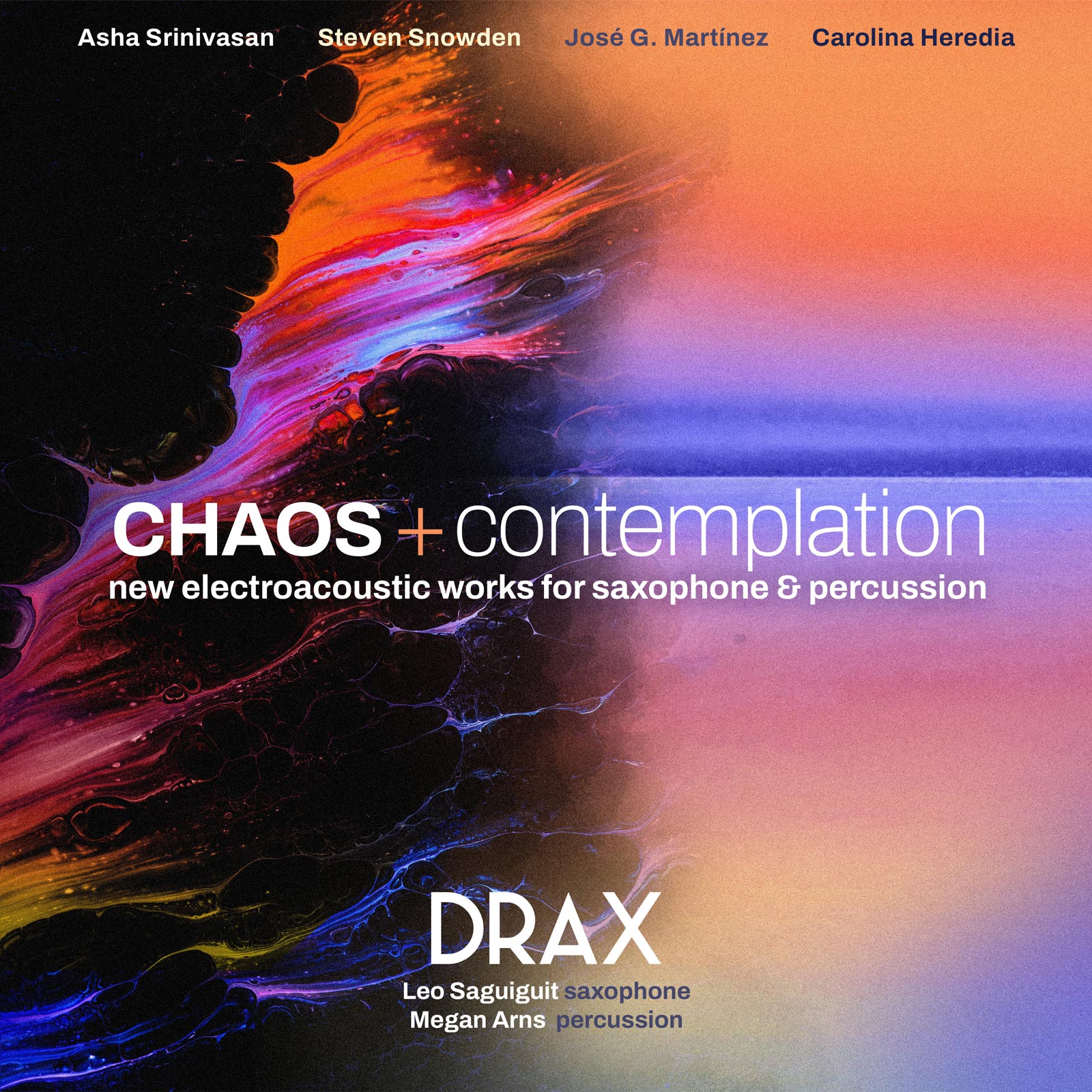 There are a number of established, conservative duo setups in Western music; but DRAX isn’t one of them, and doesn’t want to be. The saxophone-percussion duo, consisting of saxophonist Leo Saguiguit and percussionist Megan Arns, may be firmly rooted in contemporary American academia, but their music is one thing first and foremost: positively rebellious.

Having intentionally commissioned a diverse range of composers in terms of style, ethnicity and gender, DRAX ambitiously attempts to scrutinize and reflect upon current social issues on CHAOS + CONTEMPLATION. Political turmoil, mass hysteria and the impact of ubiquitous technology are among the motifs presented, and this struggle is impressively manifest and tangible in the music – energetic, unapologetic and raw. 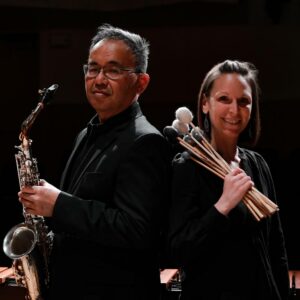 Formed in 2014, DRAX is a faculty ensemble-in-residence at the University of Missouri School of Music with Leo Saguiguit (saxophone) and Megan Arns (percussion). Dedicated to performing and creating new repertoire for this unique combination of instruments, the duo made its international debut at the World Saxophone Congress in Strasbourg, France. DRAX has performed at the Mizzou International Composers Festival, the Percussive Arts Society International Convention, conferences of the North American Saxophone Alliance, Odyssey Chamber Music Series of Columbia, Mareck Center for Dance, and residencies at universities including Virginia Tech University, Sam Houston State University, Colorado State University, and the Eastman School of Music.

Chaos + Contemplation is the culmination of a commissioning and recording project to create new works that combine multimedia with saxophone/percussion duo. DRAX commissioned four composers, all of whom were past resident composers of the Mizzou International Composers Festival, a program of the Mizzou New Music Initiative. The following compositions provide an array of artistic perspectives and sonic possibilities yet are similar in that they express artistic commentary to contemporary events. Through their work, these composers grapple with the implications of the 2016 United States presidential election, police brutality, racial injustice, hostility, isolation, reconciliation, and the need to heal. The duo elaborates:

We wanted our project to reflect the voices of a diverse group of composers in their aesthetic approaches, as well as their different perspectives with respect to gender and ethnicity. Other than a time limit, composers were given free reign with their choice of instrumentation, multimedia element, and thematic subject. What resulted was a remarkable collection of works that comment on — both directly and indirectly — the emotional rollercoaster of the continuing tumultuous political and social landscape of the last several years. We also hear from the different perspectives of composers living in America, from the born-and-raised, to the first-generation citizen, and to recent transplants from abroad. The music challenges the listener while also unleashing the unlimited soundscape of the saxophone/percussion duo with electronic music.

Asha Srinivasan’s Tantrums is an adventurous work that explores an array of melodies, modes, rhythms, extreme dynamics, range, and extended techniques. In it, we hear tantrums triggered by political frustration and anger. This may bring on a serious need to sob, rage, move, and express, yet Srinivasan reminds us of the malleability and fluctuation of these emotions. She states:

In the aftermath of the 2016 national election, I noticed an uncanny parallel between the morphology of my emotional response and my toddler’s tantrums. Periodic outbursts of wailing subside into simmering whimpers followed by a numb silence as we try to regain composure. Just as we catch our breath, allowing ourselves to be consoled, new thoughts re-trigger the raging beast within, until finally, we have lost all energy for shouting, and we reluctantly settle down. Perhaps rationality returns and beauty is rediscovered. Here is when a toddler’s Buddha mind, ever in the present moment, can be diverted back to play and laughter. But the adult’s monkey mind drags us back into the past, frenzy and panic build again. Ultimately, though, we cannot bear this state of anxiety and we drift into an uneasy acceptance of reality.

Srinivasan is an Indian-American composer and Associate Professor of Music at Lawrence University. Born into a musical family (her mother being a professional singer of Indian film songs), Srinivasan grew up singing Carnatic music, the classical music of Southern India, while learning Western classical music in American public schools. She draws from her Western musical training and Indian heritage to create her compositional language.

We Don’t Have Enough Time, Where Are Our Mothers

The two works by Steven Snowden (We Don’t Have Enough Time and Where Are Our Mothers) were written in the wake of the presidential election, reacting to the ways Americans receive information and news via social media. Citizens must distinguish between what is true and what is propaganda. These works represent two very different personal reactions: the first navigates anger, confusion, and absurdity amidst information overload, while the second seeks to reconcile feelings of inner turmoil through quiet self-reflection. Though resolution and understanding are sought in both approaches, more questions than answers are raised, and truth is further obfuscated rather than illuminated. Snowden sums up his work through the following quote from Criss Jamie’s book, Venus in Arms (2012):

In the age of technology there is constant access to vast amounts of information. The basket overflows; people get overwhelmed; the eye of the storm is not so much what goes on in the world, it is the confusion of how to think, feel, digest, and react to what goes on.

Writing music for dance, theater, multimedia installations, and the concert stage, Snowden’s work often focuses on United States history and how past events relate to modern society. While his musical influences are deeply rooted in bluegrass, folk, and rock, he utilizes non-traditional techniques and processes to compose works that do not squarely align with any single genre or style. He currently works as a freelance composer in Boston.

They Tried to Bury Us, They Didn’t Know We Were Seeds

The title of They Tried to Bury Us, They Didn’t Know We Were Seeds by José G. Martínez comes from a Mexican proverb that was placed in memoriam at the site of Michael Brown’s death in Ferguson MO. On August 9, 2014, Michael Brown, an unarmed African American teenager, was fatally shot by Darren Wilson, a white police officer. The next day, a series of protests and riots sparked a vigorous debate not only in the Ferguson community, but around the country. When the grand jury declined to indict Officer Wilson in November 2014, fervent social unrest was once again triggered in Ferguson.

The shooting of Michael Brown was just one of many killings that sparked the Black Lives Matter movement in the United States. All around the world, other descendants of the African diaspora saw what happened in Missouri with shock, anger, and inspiration. I am one of those people, and this piece is an homage to that fight — to the perseverance and courage that for centuries African descendants in the Americas have endured.

The texts embedded in the electronics are excerpts from the grand jury depositions of Dorian Johnson (Michael Brown’s companion) and Officer Darren Wilson. They tell a crude and sometimes contradictory account of the events. They were recorded by multiple people of different races, genders, and origins; however, the lead voices are African-American speakers. The many accents add a global context to this issue and serve as a sign of support for those at the center of this abuse — Black people from the United States. All participants are, in one way or another, tied to the University of Missouri and Columbia, which is only a couple of hours away from where the events took place.

While Argentinian composer Carolina Heredia’s Soledad was composed prior to the COVID-19 pandemic that is still impacting the globe at the time of this release, its themes of isolation, interpersonal connectivity (or lack thereof) reflects the extreme loneliness many felt during quarantine. It also deals with how humans adapt and grapple with versions of themselves. Heredia recalls her inspiration:

During the initial stages of writing this piece, I was looking for ways to connect with the sound of this duo of instruments. I realized saxophone was not a significant part of my life as a musician, [but] I suddenly remembered a phenomenal album by Astor Piazzolla and saxophonist Gerry Mulligan titled Summit (Reunión Cumbre). I found that the second version of the third track on this album, Years of Solitude, had a tone of resignation and assimilation. That is what made me think of our ultimate loneliness, the limits of our physicality, our individual subjectivities, so I decided to make this piece a depiction of our efforts and failures at connecting with our surroundings.

By exploring the merging of music and visuals, Heredia’s work is focused on the production of interactive audiovisual works. Her award-winning compositions have been performed throughout the United States and South America by several esteemed musicians and ensembles. She previously served on the composition faculty at the University of Missouri and is currently the Director of Artist Support at the American Composers Forum.

– Program Notes by Megan Murph, Ph.D.
Dr. Megan Murph is Visiting Assistant Professor of Music at the University of Missouri and serves as the Director of the Budds Center for American Music Studies. She currently serves as co-chair of the American Musicological Society’s Ecocriticism Study Group and the Society for American Music’s Experimental Music Interest Group.