The Inside Story: Fuego Quartet and MIGRATION 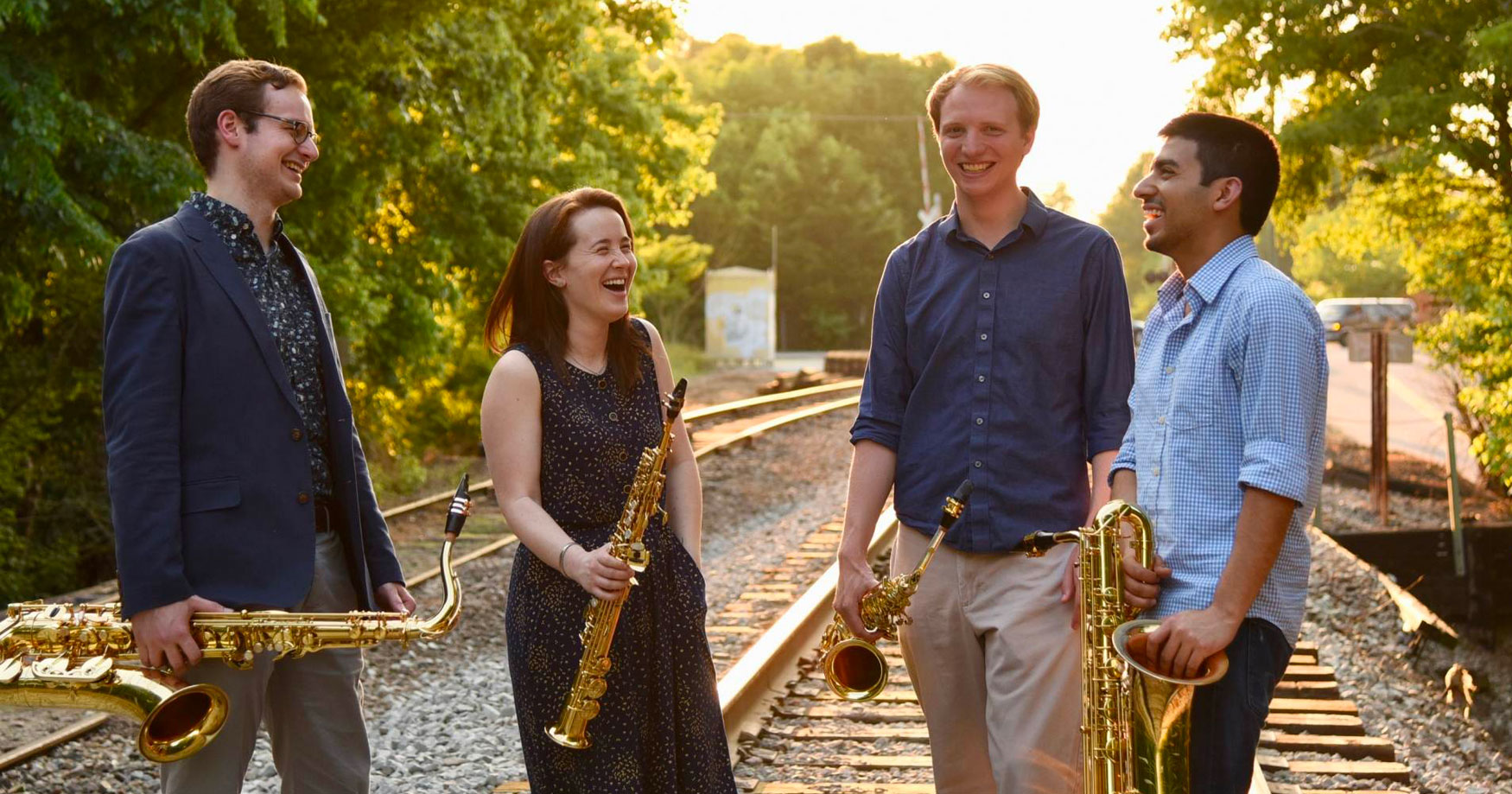 Fuego has appeared around the world, having performed Zagreb, Croatia at the 2018 World Saxophone Congress along with being a featured artist on the Dame Myra Hess Concert Series at the Chicago Cultural Center. Additionally they have given performances and masterclasses at the Eastman School of Music and other universities across the United States. Fuego’s dedication to education and community engagement is a core part of their mission. The group has already reached a wide range of classrooms, campuses, and community centers, and they always schedule performances like these alongside more traditional venues.

Today, the four members of the Fuego Quartet are our featured artists in “The Inside Story,” a blog series exploring the inner workings and personalities of our artists. Read on to learn each member’s take on where is the best place for creative inspiration…

We all realized we wanted to be artists around the early stages of learning the saxophone. We all began performing in our respective middle school bands, and having that deeper sense of community through music was something that struck each of us in a unique way. The lifelong friends and community that we built through music is, to us, one of the most “human” aspects of music. Each of our members also took private lessons on the saxophone from the beginning of our studies, so we each were encouraged from our teachers to keep practicing, learning, and growing. Everything came full circle when we could visibly see the fruits of our labor during performances for people from all walks of life. One of the most rewarding aspects of performing music is meeting the people that we were able to perform for.

We have had a few as an ensemble, and the trick to being a professional ensemble is to cover those mistakes really well! However, there are some mistakes that just happen and one can’t control. One specific example that comes to mind is a performance at the Susan B. Anthony House and Museum in Rochester NY. This performance was early on in the fall semester, so the wind coming off of Lake Ontario was very prominent. We were in the middle of a performance of the 5th movement of Maslanka’s Recitation Book, and all of the music blew off of our music stands. Luckily, we had memorized this movement for a competition, so it was a great test in the moment to see if we still knew the piece from memory (it actually worked out!).

In William Albright’s Fantasy Etudes, the second movement is entitled “Pypes.” In this movement, there is a distinct section where the soprano and alto parts exchange bagpipe melodies that are meant to emulate true sounds of the Scottish instrument. Both Erik and Nicki exert a lot of exciting energy in this section that is thrilling to both perform AND to listen to. Albright has found an extremely effective way to emulate these sounds on the saxophone. We love performing this movement for audiences because they are amazed by the different colors and timbres that a saxophone quartet can achieve.

The final piece on the album, David Clay Mettens’ Ornithology S, is also one of our favorite moments on the album. Clay’s piece really pushed our group as an ensemble because of how precise the sounds (specifically, the slap tonguing sounds) need to be. The work is also mostly in a metric pulse that is pretty uncomfortable at fast tempi (5/8 for those curious). This piece really challenged us to reconceptualize our approach to the saxophone in order to achieve some of the more intriguing sounds.

This album ties together several years of friendship and deep musicianship. Our group met at a coffee shop (the name of which ended up becoming our group name) as the new incoming graduate students at Eastman, and we all came from all over the country with different musical backgrounds and experiences. Our two years together in the same city shaped some great musical and personal memories. We knew how to buckle down and have intense rehearsals, but we also would often go out to a local brewpub or coffee shop to decompress and just hang out. We have experienced so many memorable performances as a group with this specific repertoire, including winning some of the country’s most prestigious chamber music competitions. Each of the three pieces has a special meaning to our group. To finally have a permanent and tangible outcome means that much more.

We hope to communicate the joy that we as an ensemble feel when we perform. We love to perform an eclectic program of works at our live concerts because we believe the saxophone is such an incredible vehicle of expression. We recorded this album in a live concert hall because we want our audience at home to feel like they are sitting right there in the concert hall.

We each have different interpretations of this question, so we will try to target them all. Location does play an important role in freeing up one’s mind to be open to creative thinking, but it is not always the end-all-be-all of creativity. We think that the people around you also play a big role in creative thinking because you have someone to bounce ideas off of, and conversations with people can often help clarify and focus those creative thoughts even further or give them more depth with another person’s perspective. Ultimately, creative time for each of us is different. Specifically, Nicki says she would love to be in an urban city surrounded by artists and other creative individuals. Location doesn’t play as much of a role with Erik, as long as he is surrounded by a group of others (specifically non-musicians) so he can understand how he can be meaningful in their lives. Harrison feels that being surrounded by other people is important to his creativity, but he also could be completely alone so he has space to organize his thoughts. Gabe believes that you have to make time for creativity, and for him it’s usually when he’s driving or in between daily events.

MIGRATION will be available through Ravello Records for streaming or purchase on April 12. Click here to pre-order.