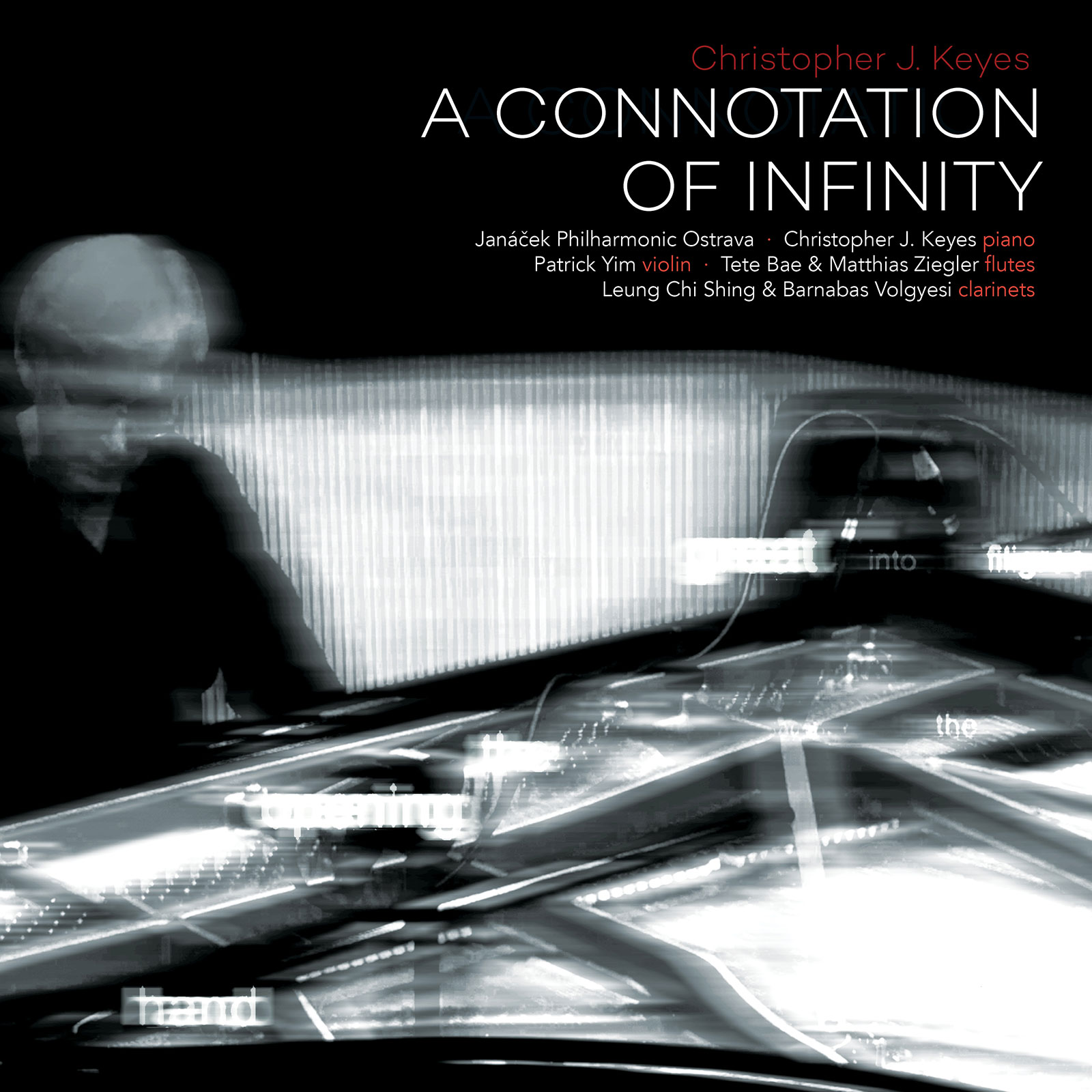 A Connotation of Infinity

Christopher J. Keyes’s new album, Ravello Records’ A CONNOTATION OF INFINITY, speaks directly to why listeners should embrace the transgressive element of electronics in traditional classical music. Keyes, who wrote as much software for the album as he did music, employs what he calls a 3D audio for a more immersive listening experience. Keyes’s latest release, which features performances of select pieces on video, envelopes and entrances the minds of listeners from all walks of life.

The album opens with the 17+ minute epic Of Worlds Beyond. Performed by an orchestra, the composition possesses a well-rounded quality of sound. Another unique feature in Keyes’s album is the use of non-musical elements to influence the piece. In Four Improvisations on Cummings, the composer uses keyboard sensors to detect pitch and dynamics that, when played, subsequently trigger text from poems in E.E. Cummings’ collection “Tulips and Chimneys." Resonant Passages features images and sounds of Hong Kong traffic as an accent to the composition’s reflection on how streams of images and sounds resonate with us as listeners and human beings.

In some compositions, the piano gives way to other instruments that star the show. Antiphon In Memory of Pierre Boulez, for instance, is a piece written for two flutes and two clarinets, paying homage to the late composer through the minimalist use of processing available in Boulez’ time. Tree of Remembrance features only violin and tape. An homage to Henri Dutilleux, Keyes wrote the composition to loosely mirror Dutilleux’s violin concerto “L'Arbre Des Songs."

A CONNOTATION OF INFINITY pushes boundaries and opens listeners to new experiences, both audially and visually. Don’t miss the chance to be a part of this riveting performance. 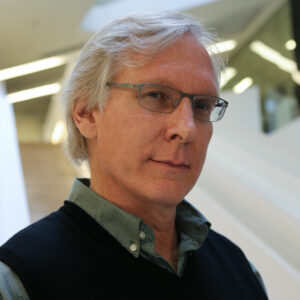 Acclaimed by Fanfare Magazine as “Masterful...a modernized Rachmaninoff” Christopher J. Keyes (b. 1963) began his career as a pianist, winning many competitions and later making his “double-debut” in Carnegie Hall as both soloist and guest composer with the New York Youth Symphony. He began formal composition lessons at the University of California at Santa Barbara, earning a B.M. in Piano Performance and a B.A. in Creative Studies with an emphasis in composition. He continued his musical training at the Eastman School of Music, completing his doctorate in 1992. His major composition teachers include Joseph Schwantner, Samuel Adler, Christopher Rouse, and Robert Morris. Among his numerous awards are the Eastman Szernovsky Award, several ASCAP Grants to Young Composers, and the Rudolf Nissim Award for best orchestral work written by a living ASCAP member. He is also an author of various scholarly articles on subjects including audio engineering, the pedagogy of composition, and music technology.

A CONNOTATION OF INFINITY

I confess, despite being a standard-repertoire/traditionally-trained pianist, at some point I started becoming bored with piano recitals. Even as a student, I wanted to bring to it something new, and not only just new repertoire. I wanted to bring to it a more immersive experience. Beginning in the late 1980s, I started using stage lighting as a new element. Shortly after that, I started composing electro-acoustic “tape” music played as a background layer underneath the solo pianist (me). In the late 1990s I started using real-time multi-channel DSP (digital signal processing) in concerts, miking the piano, processing it, and sending it out to eight or more loudspeakers surrounding the audience. That was a much more immersive experience. At that time, I also started writing my own software for real-time DSP, writing programs specific to each new piece. Finally, in the mid 2000s, I became interested in real-time image processing as well.

This has led to my most recent work, presented here. Each piece incorporates some or all of the interests above. At the heart of all of these pieces, however, is still the versatility and expressiveness of traditional acoustic instruments. Combined with technology, the pieces are an attempt to expand what these instruments can do in concerts and on recordings.

Of the Worlds Beyond

Of the Worlds Beyond, being for orchestra, already has an immersive quality to it. It was recorded and mixed in 5.1 surround-sound. Special thanks to NASA’s Goddard Space Flight Center for the use of source material. It was inspired by the many hundreds of recently discovered worlds like ours, but orbiting distant stars. We know very little about what they might look like. Thus, the imagined possibilities of colors, textures, and features were the muse for this piece.

Four Improvisations on Cummings uses keyboard sensors to detect MIDI note numbers (pitches) and velocities (dynamics), and uses them to trigger subsequent text from the poetry of E.E. Cummings’ Tulips and Chimneys. The louder the note detected the larger the text’s font, and the higher a note is detected the higher the text appears on the screen. Although I did not realize it at the time, the second improvisation is actually a close variation of an older piece, Radiant Telemetries No. 3. The older piece also uses keyboard sensors, but uses them for real-time signal processing only (no graphics). The second improvisation is for acoustic piano and graphics only.

A Distance Up Close

A Distance Up Close recognizes the intimacy performers have with their instruments while performing; the distinction between “it” and “them” blurred as they engage in a state of flow. As an audience, we enjoy witnessing this flow. A Distance Up Close explores this idea, using a webcam to bring the image of the keyboard and performer up close, but using video processing to make that image more abstract, and perhaps more distant. The audio for the piece takes tiny samples of what the pianist is playing and makes them into clouds, which drift closer and then further away.

Tree of Remembrance was written for solo violin and tape, and is an homage to Henri Dutilleux who passed away shortly before it was composed. He is, perhaps, best known for his splendid orchestral works, and especially for his violin concerto L’Arbre Des Songs (Tree of Life). Some of the violin writing is reminiscent of this concerto.

Antiphon in Memory of Pierre Boulez

Antiphon in Memory of Pierre Boulez was commissioned by the Hong Kong New Music Ensemble for a telematic performance (taking place over the internet) simultaneously in Hong Kong and Zurich in 2016. The commission came shortly after the passing of Pierre Boulez, whose work Répons (1986) had a profound effect on me as a young composer. In composing the work, I adopted a style a bit closer to that of Boulez, and limited the use of real-time processing to those he had available to him in 1986.

Resonant Passages uses the images and sounds of Hong Kong traffic as objects for processing to make them resonate. Its inspiration comes from how some images and sounds from this endless stream linger more than others, resonating with some people and not others. Even though they may seem ordinary for most, for some they hold a special meaning, some lesson, some insight, perhaps more felt than understood.

Minimal Colors uses original programming to generate images in real-time. It is a simple, minimalist piece that also uses keyboard sensors to relay to a computer which note was most recently played and how loudly. This information is used such that each black-note projects a blue line, and each white-note a red line. The brightness and vertical placement of the lines correspond to the velocity and register of the notes played. Like all of the piano pieces in this series, it is combined with the live processing of the piano’s sounds.