THE INSIDE STORY: Julius Bucsis and MIND & MACHINE 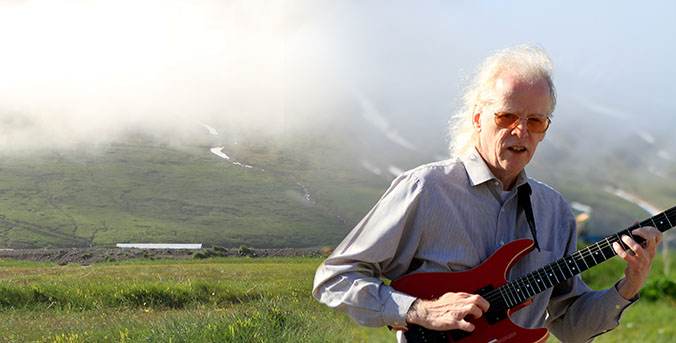 Julius Bucsis is an award-winning composer, guitarist, and music technologist. Since beginning serious efforts with composition in 2011, his works have been included in over 100 juried events worldwide. He creates compositions for fixed media, acoustic instruments with electronics, acoustic instruments without electronics, and electric guitar with computer processing. He has performed his compositions for electric guitar with computer processing nationally and internationally. His compositions have been included on CDs released by Ravello Records, Ablaze, Electro-Music, RMN Classical, and Soundiff. His latest piece, In the Interest of Time, is a striking member of the MIND & MACHINE lineup, and he is also slated to release a track in September 2018 on the second installment of the MIND & MACHINE series.

Today, Julius is our featured artist in “The Inside Story,” a blog series exploring the inner workings and personalities of our artists. Read on to discover what happened when Julius’ rock band played for an empty club…

I would love to be able to spend a couple of years in different places around the country and in various places around the world, but especially in Asia and Europe. My ideal situation would be to live for two years in one place and then move to someplace else. I’d love to experience different environments by living next to an ocean, in a desert, in the mountains, in small towns, in big cities, and various other places. I’d also like to develop an awareness of diverse concepts about life, the arts, human relations, and other things by interacting with different cultures. In terms of creativity, I think having a large set of varied experiences from which to draw facilitates a wider range of artistic expression. As far as Asia and Europe are concerned, I love the sense of being connected to a long span of history that you get when you’re in these places. For example, when walking through some European cities you can see medieval cathedrals and monuments built by the Romans right alongside the more modern buildings. Of course since I’m a computer musician, I’d only want to be in places where there is electricity.

I had a cousin from Europe visit me when I was 13. He brought me a guitar as a gift. When I first picked it up and tried to make some sounds, I immediately knew I would be involved with music for the rest of my life. I soon began taking lessons and practicing regularly. I haven’t stopped playing since, though a few years ago I almost did. For most of my life, my engagement with guitar had mostly been playing other people’s music and improvising. A few years ago, I decided I wanted to express myself through composition. I had started to compose music and was going to school, so I didn’t have much time for guitar playing. I decided that I would focus on composing and no longer play guitar. Then one day out of the blue, I had an opportunity to do a performance that required me to play some original music for guitar. I didn’t have enough material so I had to compose several pieces in a few days. I performed at the show and that led to many other performance opportunities. I now split my time between composing and playing guitar.

Having started with guitar during the era of the guitar hero, Jimi Hendrix was a big early influence. I would play along with his recordings constantly until one day I realized I was sounding too much like him. I immediately began to listen to other people and I then began my lifelong journey into eclecticism. The progressive rock band Yes soon became a big influence, though I also searched for more music. Aaron Copland and Igor Stravinsky were among my early discoveries and they led me to many other great composers. At that time, there was a record label, Nonesuch, that released albums of music from around the world. I would go to the record store, look through what they had, and would pick up something as often as I could. I remember getting recordings of music from Bali, India, Tanzania, and many other places. I became a musical explorer, looking for new and varied listening experiences at a young age, and I have continued that practice ever since.

I have experienced numerous unusual situations while performing. One was many years ago when I was playing guitar with a cover band at a club. We played popular rock music. The club was in a rural area and when we arrived it was completely empty except for the staff. It stayed that way throughout our first set. The club owner was really mad and started giving us dirty looks. He even charged the lead singer a couple of dollars for a glass of tap water. We had planned on playing three sets that night so we decided we would make the most of the opportunity and think of it as a rehearsal, so we played our second set and went right into the third set without taking a break. At this point the club was still completely empty. We were playing our second-to-last song when suddenly a very large group of people came in and filled up the club. They were in a party mood so we took a short break and played our entire show again.

Well, this must be a trick question. If I could make a living at any job in the world, I would want that job to be a composer and performer of the music I want to write and play. What could be better than making a living by doing the things you love the most? Maybe that’s the trick part of this question because composer/performer of original music doesn’t really count as a job. I know some people are able to do it, but they are very few. Such opportunities don’t exist for most of us. Answering the question in a more realistic manner, I enjoy teaching, so getting a job in higher education would be nice. I love many aspects of the academic environment, especially being surrounded by and interacting with people who are engaged in scholarly pursuits. I find it very stimulating.

Hypothetically I would say guitar. I have spent a good portion of my life working with the instrument to develop my level of skill and it is tempting to think that if I didn’t have to spend so much time with the instrument (and still have the same skill level) then I would benefit from being able to spend that time doing something else, like for example dedicate all my time to composing. However, I wonder if this would truly be beneficial. All the years of practice and struggle might seem to be time spent unproductively, but it is that process that has shaped me into who I am. If I hadn’t had to do that then I would be a different person. Also, I derived a lot of enjoyment from the time I spent with my instrument. For me as a performer, musical satisfaction doesn’t come only from the performance. It is also obtained from the process that leads to the performance. I feel the same as a composer. It’s not the final product that gets me most excited. It’s the process of creating it that I love the most.